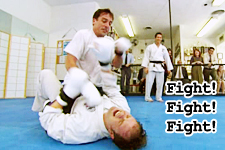 “The Fight”
Season 2 Episode 6
Air Date: November 1, 2005
Writer: Gene Stupnitsky and Lee Eisenberg
Summary: Jim helps orchestrate a showdown between Michael and Dwight, however Pam and Jim have a “fight” of their own.

Quick Recap
“Where is my desk?”: Dwight walks in to find his desk is missing. Jim gives him clues by saying “Warmer” and “Colder”, and Dwight finds his desk . . . in the men’s bathroom. However when Jim calls to ask about prices, Dwight immediately gets back to work.
“He’s a purple belt, that’s really high”: Dwight has recently become a purple belt in karate. Michael claims he can still kick Dwight’s ass, so with some prodding from Jim and Pam, Michael decides to have a match with Dwight at Dwight’s dojo. The whole office comes to witness Michael fighting dirty and embarrassing Dwight.
The Perfect Storm: Michael has to sign time card, purchase orders, and expense reports by the end of the day. Problem is, he tends to put off anything that’s actual work. Even after Pam repeated tries to get Michael to sign them, the forms are still unsigned by the end of the day. The staff resorts to forging his signature.
“Bring it, Beesly”: At Dwight’s dojo, Pam and Jim have a little “fight” that results in Jim playfully wrestling with Pam and picking her up off the ground. Pam is laughing until she notices her coworker’s watching and insists Jim let’s her go. She avoids Jim for the rest of the day. When Jim leaves, he sets a bag of chips on the counter as a peace offering.
Assistant Regional Manager: After their fight, Dwight avoids Michael. Michael decides to make it up to Dwight by promoting him from “Assistant to the Regional Manager” to “Assistant Regional Manager”, Dwight thanks Michael Japanese style, then immediately heads to his desk to white out the “to the”s on his business cards.
Michael’s Words of Wisdom: Michael: I told Dwight that there is honor in losing. Which, as we all know, is completely ridiculous, but there is, however, honor in making a loser feel better which is what I just did for Dwight. Would I rather be feared or loved? Um, easy. Both. I want people to be afraid of how much they love me. And I think I proved that today at the dojo.

🏅Flonkerton Medal Ceremony🏅
The “Totally worth it” Medal: Who knows how much time it took Jim to get Dwight’s entire desk (with everything on it) into the men’s room, but the payoff was worth it.

Flonkerton’s Favorite Quotes
Dwight: Where is my desk?
Jim: That is weird.
Dwight: This is not funny. This is totally unprofessional.
Jim: Ok, well, you’re the one who lost the desk.
Dwight: I didn’t lose my desk.
Jim: Okay, calm down. Where was the last place you saw it?
Dwight: Okay, who moved my desk?
Jim: I think you should retrace your steps.

Michael: [singing and tapping on his coffee mug] I don’t want to work, I just want to bang on this mug all day.
Ryan: Did you ask me here for any specific reason?

Pam: [Reading Jim’s palm] You’re major and minor lines cross at a ridge – that sucks.
Jim: You making this up as you go along, aren’t you?
Pam: I am just following the website.
Jim: Well, at least I don’t have cavities.
Pam: Yes, you have very nice teeth.
Jim: Thanks.

Dwight: I come from a long line of fighters. My maternal grandfather was the toughest guy I ever knew. World War II veteran. Killed 20 men then spent the rest of the war in an Allied Prison Camp. My father battled blood pressure and obesity all his life. Different kind of fight.

Dwight: I need to change my emergency contact information from Michael Scott.
Ryan: Ok, to what?
Dwight: Just put “The Hospital.” Contact number: just put 9-1-1. [Dwight leaves] Michael: He is such a sore loser. You heard, obviously, that I mopped the floor with him this afternoon. You know what, um, do yourself a favor and just keep me as his contact and I will call the hospital. Cut out the middle man.

Michael: I have been testing you the entire day. Did you know that?
Dwight: Of course.
Michael: And I am happy to say that you have passed. So effective immediately I am promoting you from Assistant to the Regional Manager to Assistant Regional Manager.
Dwight: Michael, I don’t know…
Michael: I know, I know, I know, I wouldn’t be offering it if I didn’t think you could handle it.
Dwight: I can handle it. I can. Wow. So I guess this will just be my office.
Michael: No, no, title change only.
Dwight: I’ll have Pam send out a memo.
Michael: No, no. Three month probationary period. Let’s not tell anybody about this right now.
Dwight: Just a formality.
Michael: Absolutely but not really.

(Know of any fanfics centered around “The Fight”? Please comment here or on the forums)