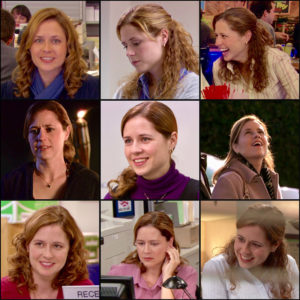 March 7 is Jenna Fischer’s birthday, and March 8 is International Women’s Day so to commemorate we’re putting together a list of some of Jenna’s best episodes as Pam Beesly, and as a bonus recommending some fics to go with them.

Jenna played Pam with warmth and heart and could make you smile, cringe, laugh and cry both tears of joy and sadness, sometimes all in one episode! So without further ado, here is our (incomplete!) list.

Hot Girl (106) – When an attractive purse salesmen comes into the office and gets the attention of all the office men, Pam finds herself jealous. Jenna is subtly stellar in this episode as Pam subconsciously competes with Katy the purse girl for Jim’s affection. Greg Daniels himself raves about the improvised lip gloss scene for good reason, Jenna so quietly shows Pam incredibly vulnerable as the cameras catch her trying to pretty herself up.
Fic Rec: Hot Dates by JamJunkie14

The Dundies (ep 201) – At first we think Pam’s objection to the Dundies is the same as everyone elses, but then we learn it’s personal as Michael often uses the ceremony to poke fun at her long engagement (even worse, then-fiance Roy plays right along). So when she decides to attend the Dundies anyway she handles it like any grown adult would: by drinking copious amounts of alcohol. Jenna (who’s not a big drinker) actually did research for this episode by letting co-star BJ Novak take her out drinking and making observations on her inebriated behavior. As a result we the audience have lots of fun seeing Pam letting go of her inhibitions, but she’s still got her warmth as she very sincerely thanks Michael for the ceremony, as well as God for her Whitest Sneakers Dundie.
Fic Rec: The Best Dundies Ever by shan21

Boys and Girls (ep 215) – It may be a comedy but The Office has a way of making you feel deeply for it’s characters and Jenna quietly shatters your heart in this episode, as we watch Pam be presented with a great opportunity to pursue her artistic dreams, only to be held back by an unsupportive fiance and by her own fears. Her “house with a terrace” talking head is especially emotional when we see Pam break down, the terrace becoming an unintended metaphor for her dreams.
Fic Rec: New York by yanana

Business School (317) – Few episodes are more important to Pam’s character than this one, and it’s one where you feel every emotion Pam’s feeling, from excitement and anticipation about her art show to disappointment and heartbreak when she overhears Gil and Oscar’s comments (and when a certain salesman never shows up) and ultimately validation from the unlikeliest of sources and Michael for once says exactly what Pam needed to hear when she needed to hear it (well, at least before the chunky part).
Fic Rec: Babylon by Paper Jam

Beach Games (323) – Really every episode of S3 could go on this list because it was truly Pam’s (and Jenna’s) season but Beach Games gets a shoutout for having the moment where Pam literally walks across fire and comes out the other side ready for more courage and honesty. When Pam turns to Jim you truly feel her desperately missing him despite him being five feet away, and her sincerity of needing something with him, even just friendship.
Fic Rec: Visibility by callisto

Chair Model (410) – Pam is at her most radiant, playful and carefree in this episode and it’s just fun to see. Sure she really wants Michael to pick a chair already and she may accidentally have gotten herself kick out of her apartment but she’s happy and in love with Jim so it doesn’t really matter. She even has a good sense of humor about Jim teasing a proposal and tying his shoe instead.
Fic Rec: Quiet and Calm by xoxoxo

Customer Survey (ep 507) – While in New York, Pam cleverly keeps herself in the Scranton loop by buying her and Jim tiny Bluetooth headsets and we’re able to enjoy some of that classic Jim and Pam banter and flirting, alone with a little classic teasing of Dwight even though Pam is suppose to be two states away. But it’s the more serious scene at the end where Jenna really shines, and just from her face you’re able to feel Pam’s dilemma between staying in New York longer or going back to Scranton and to Jim without Pam really saying a word about it.
Fic Rec: Bluetooth Blues by LoveFool

China (ep 710) – Pam and Dwight have one of the greatest dynamics on the show and this episode nicely showcases it when they go head-to-head over new building manager Dwight’s measures to cut costs (and as a result cute the comfort of everyone). It always fun to see Pam scheming and she challenges Dwight to call her bluff about moving the office. But we also see the vulnerable side of Pam when she expressed to Jim her fear of failing.
Fic Rec: Enough by Deedldee

The List (ep 801) – A very pregnant, very emotional Pam seems to be crying over everything. And the new management situation just causes Pam more distress when she learns Robert California puts her on the “losing” side of an office-wide list. But Jenna (also very pregnant at the time) play Pam with the right amount of humor and sympathy and by the end you just want to smile and give her a hug when Jim’s list makes her cry yet again, but this time tears of happiness.
Fic Rec: Thoughts by Dedeen

As we said at the start, this is an incomplete list and could easily be twice as long, these are just 9 episodes we feel Jenna really shines as Pam. Maybe someday (next year?) we’ll do a Part II.