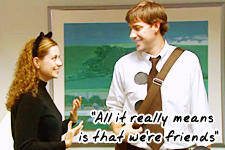 Previous Round, The Fire: It was a constant back and forth as we saw Pam deal the reality of another woman in Jim’s life. On the plus side, Katy’s presence made Pam’s feelings for Jim creep up to the surface. But on the down side, Pam acted a bit immature as she openly mocked Katy and purposely kissed Roy in front of Jim, resulting in a score of -4.

Jim is at Pam’s desk when Dwight makes his dumb “3-hole-PUNCH” joke: +1
And they immediately team up for a brilliant prank on Dwight: +1
Plus Jim takes advantage of being behind the desk with Pam, leaning over her the whole time: +1
Pam smiles at Jim the whole time he’s impersonating Michael on the phone: +2
And they share an air five: +1
Pam thinks Jim is very talented and deserving of a better job: +1
But Jim takes her encouragement as a sign that she doesn’t want or need him around and is visibly upset as he leaves her desk: -5
Pam is extremely worried when Jim is called into Michael’s office: +2
She runs up and grabs his hand when he leaves Michael’s office: +2
But Jim is short with Pam and walks away: -3
Pam pulls Jim aside to apologize: +1
Jim is not very responsive to Pam’s apology: -2
But after she joking says she would “blow her brains out” if he left, he chuckles and motions for her to come along: +1
And the camera’s catch him break into a big smile: +2
Jim tells the camera’s if Pam ever left, he would probably look for another job: -1

Final score, +4: Things were going swimmingly for Pam and Jim, but Jim’s reaction to Pam’s job suggestion set the Pam Pong score back to zero and Pam spent the rest of the day trying to get back in Jim’s good graces. She managed to pull it off in the last couple minutes, but some concerns still remain. We see in this episode that even the slightest rejection from Pam hurts Jim very much. Since Pam’s engaged, we can only brace ourselves for the inevitable rejections Jim will suffer. But on the plus side, Pam recognized Jim’s hurt and did everything she could to make it better.

Next Round: The Fight