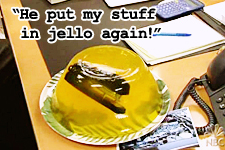 Quick Recap
The Topic: A camera crew arrives at Dunder Mifflin Paper Scranton Branch, managed by Michael Scott – who thinks he’s the funniest, hippest boss on Earth (his employees, naturally, do not agree). The pressure is on to keep morale up as Michael’s superior, Jan Levinson-Gould, delivers the news that downsizing is likely and either Scranton or Stamford is going to absorb the other branch.
“1 word, 2 syllables: Demarcation”: Michael’s number two is Dwight Schrute, a man who takes his job seriously to a fault and has no sense of humor. Salesman Jim Halpert uses this to his advantage in what appears to be daily pranks that he plays on Dwight, today’s prank being him putting Dwight’s stapler in Jell-O.
A not-so-secret crush: Inside jokes about cat parties and Jim’s intimate knowledge of Receptionist Pam Beesly’s preferred yogurt flavor indicates these two are more than just coworkers. So what’s standing in the way? Just warehouse worker Roy, Pam’s long-time fiance.
You’ve been Xed, Punk: With new temp Ryan Howard watching in horror, Michael tries to make a joke out of the downsizing rumors by pretending to fire Pam. But the joke backfires when Pam starts crying and calls Michael a jerk.
Michael’s Words of Wisdom: ‘What is the most important thing for a company? Is it the cash flow? Is it the inventory? Nuh-uh. It’s the people . . . [My proudest moment here] was a young Guatemalan guy. First job in the country, barely spoke English. He came to me, and said, “Mr. Scott, would you be the godfather of my child?” Wow. Wow. Didn’t work out in the end. We had to let him go. He sucked.’

Flonkerton Medal Ceremony
The “Copy Cat” Medal: This episode is practically identical to the first episode of The UK Office, with similar characters, dialog, and virtually the same plot, causing most critics to brush the show off as a “fail adaption”.
The “Hey, it’s just a Pilot” Medal: Many fans list this as one of the worst episodes, but come on, it’s a pilot. Like a book’s cover, you can’t judge a show by a pilot, and the pilot serves it purpose of introducing us to the main characters and has a decent amount of laughs (even if they are borrowed jokes from the UK Office).

Flonkerton’s Favorite Quotes
Michael: [on the phone] Thank you very much, sir. You’re a gentleman and a scholar. Oh, I’m sorry. OK. I’m sorry. My mistake. [hangs up] That was a woman I was talking to, so… She had a very low voice. Probably a smoker.

Michael: Did we get a fax this morning?
Pam: Uh, yeah, the one…
Michael: Why isn’t it in my hand? A company runs on efficiency of communication, right? So what’s the problem, Pam? Why didn’t I get it?
Pam: You put in the garbage can that was a special filing cabinet.

[Jim sets up a sharpened pencil barricade between his and Dwight’s desk]
Dwight: You can’t do that.
Jim: Why not?
Dwight: Safety violation. I could fall and pierce . . . an organ.
Jim: [crosses fingers] We’ll see.

Dwight: Downsizing? I have no problem with that. I have been recommending downsizing since I first got here. I even brought it up in my interview. I say, bring it on.

Michael: People I respect, heroes of mine, would be Bob Hope… Abraham Lincoln, definitely. Bono. And probably God would be the fourth one. And I just think all those people really helped the world in so many ways that it’s really beyond words. It’s really incalculable.

Jim TH: If I left, what would I do with all this useless information in my head? You know? Tonnage price of manila folders? Um, Pam’s favorite flavor of yogurt, which is mixed berry.
Pam TH: Jim said mixed berries? Well, yeah, he’s on to me. Um… [Laughs]

Dwight: Damn it! Jim!
Michael: OK. Hold on, hold on. The judge is in session. What is the problem here?
Dwight: He put my stuff in Jell-O again.
[Pam laughs, Jim smirks]
Dwight: That’s real professional thanks. That’s the third time and it wasn’t funny the first two times either Jim.

Michael: What is that?
Dwight: That is my stapler.
Michael: No, no, no. Do not take it out. You have to eat it out of there, because there are starving people in the world [turns to camera] which I hate, and it is a waste of that kind of food.
Dwight: OK you know what, you can be a witness. [points to Ryan] Can you reprimand him?
Jim: [eating jello from a cup] How do you know it was me?
Dwight: It’s always you. Are you going to discipline him or not?
Michael: Discipline. Kinky! [Laughs] All right, here’s the deal you guys. The thing about a practical joke is you have to know when to start and as well as when to stop.
Dwight: Yeah.
Michael: And yeah, Jim this is the time to stop putting Dwight’s personal effects into Jell-O.
Jim: OK. Dwight, I’m sorry, because I have always been your biggest flan.
Michael: [Laughing] Nice. That’s the way it is around here. It just kind of goes round and round.
Ryan: You should’ve put him in custardy.
Michael: Hey! Yes! New guy! He scores.
Dwight: OK, that’s great. I guess what I’m most concerned with is damage to company property. That’s all.
Michael: Pudding. Pudding… I’m trying to think of another dessert to do.

(Know of any fanfics centered around The Pilot? Please comment here or on the forums)