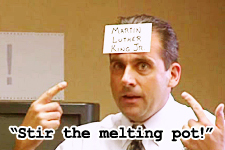 “Diversity Day”
Season 1 Episode 2
Air Date: March 29, 2005
Writer: B.J. Novak
Summary: After the company sends a “sensitivity” trainer for a diversity seminar, Michael creates his own seminar complete with his special brand of insensitive sensitivity. Jim is constantly interrupted while trying to close his biggest sale of the year.

Quick Recap
The Topic: A “diversity” trainer is sent to Scranton to hold a seminar about recent insensitive remarks spoken by a certain regional manager. Michael is left of out the leadership role in the seminar. Even worse, the seminar was really all for him, corporate only had everyone participate so Michael wouldn’t be embarrassed.
Meanwhile: Jim is having difficulty renewing his biggest account. First Dwight decides it’s imperative to do some document shredding when Jim’s on the phone, and then the diversity seminars keep Jim away from the phone all day. When he finally gets a hold of his client, he finds out Dwight had swooped in and renewed the account already.
Diversity Tomorrow: Not to be outdone by the corporate mandated seminar, Michael holds his own diversity seminar in which he makes everyone wear a card with a race or culture on their foreheads and treat everyone else like the race on their forehead. When Michael starts talking to Kelly (an Indian-American) in a stereotypically Indian way, Kelly slaps him.
“Not a bad day”: After learning he’s lost his biggest client to Dwight, a very down Jim reenters the conference room. He sits down next to a sleepy Pam, who unwittingly nods off and rests her head on Jim’s shoulder. A smile spread over Jim’s face, and prompts him to say in his final talking head that it wasn’t a bad day after all.

🏅Flonkerton Medal Ceremony🏅
The “Squirm in your seat” Medal: Michael thinks he’s addressing race-relations in a progressive way, but really he’s just making everyone uncomfortable, especially all of us watching.
The “Awwww” Medal: If the shear joy on Jim’s face when Pam falls asleep on his shoulder or his lovestruck smile when he, despite losing his biggest client, proclaims it was “Not a bad day” doesn’t make you go “awww”, then I don’t know what will.

Flonkerton’s Favorite Quotes
Dwight: Retaliation. Tit for tit.
Jim: That is not the expression.
Dwight: Well, it should be.

Dwight: Excuse me, I’m sorry, but that’s not all it takes to be a hero.
Mr. Brown: Oh, great. Well, what is a hero to you?
Dwight: A hero kills people, people that wish him harm. A hero is part-human and part-supernatural. A hero is born out of a childhood trauma, or out of a disaster that must be avenged.
Mr. Brown: Ok, you’re thinking of a superhero.
Dwight: We all have a hero in our heart.

Michael: You call that diversity training? I don’t. Were there any connections between any of us? Did anyone look each other in the eye? Was there any emotion going on? No. Where was the heart? I didn’t see any heart. Where was my Oprah moment? OK, get as much done as you can before lunch because, afterward, I’m going to have you all in tears.

Michael: This is an environment of welcoming and you should just get the hell out of here.

Michael: Abraham Lincoln once said that, “If you’re a racist, I will attack you with the North.” And those are the principles that I carry with me in the workplace.

Michael: Ok, well since I am leading this, let’s get down to business and why don’t I just kind of introduce myself, OK? Um. I am Michael and I am part English, Irish, German and Scottish. Sort of a virtual United Nations. But what some of you might not know is that I am also part Native American Indian.
Oscar: What part Native American?
Michael: Two fifteenths.
Oscar: Two fifteenths, that fraction doesn’t make any sense.
Michael: Well, you know what, it’s kind of hard for me to talk about it. Their suffering.

Dwight: [has ‘Asian’ on forehead] OK, do me. Something stereotypical so I can get it really quick.
Pam: OK, I like your food.
Dwight: Outback steakhouse. [Australian accent] I’m Australian, mate!
Michael: Pam, come on. “I like your food.” Come on stir the pot. Stir the melting pot, Pam! Let’s do it. Let’s get ugly. Let’s get real.
Pam: OK. If I have to do this, based on stereotypes that are totally untrue, that I do not agree with, you would maybe not be a very good driver.
Dwight: Oh, man, am I a woman?

(Know of any fanfics centered around Diversity Day? Please comment here or on the forums)

(back to the top)