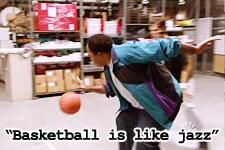 “Basketball”
Season 1 Episode 5
Air Date: April 19, 2005
Writer: Greg Daniels
Summary: After discovering the warehouse has a basketball hoop, Michael initiate a basketball game between the office and warehouse staffs. Rivalry escalates when it’s decided the losing team will have to come in on Saturday.

Quick Recap
Office vs Warehouse: Michael instigates a game of basketball between the office and warehouse. After talking some smack with warehouse foreman Darryl, the stakes are raised and it’s decided the losing team has to work on Saturday.
“Basketball? Kind of my thing”: Michael forms his dream team of himself, Ryan, Jim, Dwight, and Stanley, his “secret weapon”. Jim is looking forward to playing, seeing an opportunity to show of his basketball skills in front of a certain receptionist.
The Big Game: Things don’t go quite as Michael planned during the game. Stanley is hardly a “secret weapon”, Michael greatly overestimates his basketball ability, and the Office worker don’t have the teamwork or the spirit that the warehouse team has. Michael cries foul and ends the game, claiming the office was ahead in points. But the warehouse intimidates Michael into saying the office staff will work Saturday.
Larry Legend: Jim insists on being matched up against Roy, and plays a bit more aggressively with Pam watching, even to the point of being elbowed by Roy and getting a split lip. After the game, Pam compliments Jim’s basketball skills, and Jim is all smiles until he hears Pam flirting with Roy.
Michael’s Words of Wisdom: “The great thing about sports is that it is all about character. And you can learn lessons about life even if you don’t win. But we did because we were ahead.”

🏅Flonkerton Medal Ceremony🏅
The “Rivalry” Medal: What starts off as a friendly game turns into rift between the office and warehouse (or rather Michael and the warehouse).
The “Uncomfortable PDA” Medal: Though she’s engaged to another man, Jim is used to having Pam to himself, more or less. When Pam kisses Roy, and later flirtatiously suggests they get into a tub, Jim can’t hide how uncomfortable he is.

Flonkerton’s Favorite Quotes
Michael: Today at lunchtime we’re going to be playing the warehouse staff at a friendly little game of basketball. My idea. Last time I was down there, I noticed they’d put up a couple of hoops, and I play basketball every weekend. So I thought, “This might be kinda fun.” And so I started messing around and… I’m sinking a few, you know. Swish, swish, swish. Nothing but net. And their jaws just dropped to the floor. African-Americans!

Michael: All right, here’s what I’m going to do. The hand strikes and gives a flower. You are not going to play basketball. But I need somebody to come in and take over the holiday and weekend work calendar.
Dwight: I can handle that.
Michael: Good. Excellent, it’ll be fun. Because corporate, uh, wants someone to be here on Saturday. And so we’re going to have to have some people come in on the weekend, and I know nobody’s gonna want to do it and I know everybody’s gonna complain and bitch and I don’t want to have to deal with that.
Dwight: And that’s why you have an assistant regional manager.
Michael: Yes it is. Assistant to the regional manager.
Dwight: [to camera] Same thing.
Michael: No, it’s not. It’s lower, so…
Dwight: It’s close.

Dwight: So we need someone to work this Saturday and I think that, that should be…Jim.
Jim: God, this is so sad. This is the smallest amount of power I’ve ever seen go to someone’s head.

Michael: And this is the foreman. Mister Rogers.
Darryl: It’s not my real name.
Michael: No, it’s Darryl. Darryl is Mista Ra-jahs.
Ryan: Darryl Rogers?
Darryl: Darryl Philbin. Then Regis, then Rege, then Roger, then Mister Rogers.

Michael: Are we ready for the game?
Everybody: [halfheartedly] Yeah.
Michael: I… yeah, yeah. I know, grumble, grumble. But you would follow me to the ends of the earth, grumbling all the way. Like that, uh, dwarf from Lord of the Rings.
Dwight: Gimli.
Michael: Nerd. That is why you’re not on the team.
Dwight: Just trying to be helpful.
Michael: Uh, [in a nerdy voice] “I’ll help, Elwyn Dragonslayer, uh, ten points, power sword.”
Jim: [laughing] That’s him.

Oscar: I can help out, if you need me.
Michael: I will use your talents come baseball season, my friend. Or if we box.
Kevin: I have a hoop in my driveway.
Michael: No.
Phyllis: I have a sports bra.
Michael: No, no, ridiculous.

Michael: [hits Pam in the head with a piece of paper] Off the backboard!
Pam: Please don’t throw garbage at me.
Michael: Oh, Pam with a zinger. Hey, Pam, how would you, like to be our cheerleader today? You know, some, ah, pigtails? A little, ah, halter top, you could tie that up. And you know, something a little, just, youthful, for a change. Just this once?
Pam: I don’t think so Michael. Besides, I can’t cheer against my fiance.
Jim: I’ll do it. Wear a little flouncy skirt if you want, and…
Michael: Yeah, I bet you would. Just try not to be too gay on the court. And by gay I mean, um, you know, not in a homosexual way at all. I mean the uh, you know, like the bad-at-sports way. I think that goes without saying.

Michael: When I am playing hoops all of the stress and responsibility of my job here just melts away. It’s gone, I’m in the zone. Who am I? Am I Michael Scott? I don’t know… I might just be a basketball machine. What’s Dunder Mifflin? I’ve never heard of it. Filing? Paperwork? Who cares? Possible downsizing? Um… well, that’s probably gonna happen, actually.

Michael: Hey, what a game, huh? What a game.
Oscar: What time do we have to come in?
Michael: Come on. Let’s not be gloomy here man. We’re all in this together. We’re a team. You know what? Screw corporate, nobody’s coming in tomorrow. You have the day off. Like coming in an extra day is gonna prevent us from being downsized. Have a good weekend.

(Know of any fanfics centered around Basketball? Please comment here or on the forums)