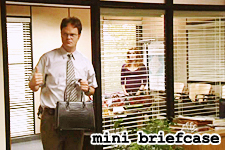 Quick Recap
New Incentives: Corporate has started a new incentive program where the top salesmen of the month gets a $1000 gift. Michael is trying to decide what the best incentive is when a purse saleswoman comes to the office. Michael’s “No Vendors” policy is quickly thrown out the window when he sees the attractive Katy.
Pam 6.0: Nearly all the office men vie for Katy’s attention, including Dwight. Jim coaches Dwight on how to approach Katy, saying Dwight should buy a purse since they’re “mini-briefcases”. Michael also tries to impress the purse girl by using the $1000 from corporate to buy an espresso machine, and offering her a ride home. But Katy shoots Dwight down when he asks her out, and Michael’s advances fail as well.
What is your type, Halpert?: Roy tells Jim he should go for Katy, saying he’d “be all over that” if he wasn’t with Pam, a comment Pam is not amused by. Though Jim has little interest in Katy at first, after Roy and Pam have a flirty tickle fight at his desk, Jim does eventually talk to Katy, and after work they go out for drinks, much to Michael’s (and Pam’s) dismay.
Michael’s Words of Wisdom: “I think in order to be a ladies man, it’s imperative that people don’t know you’re a ladies man, so I kind of play that close to the chest. I don’t know, what can I say? Women are attracted to power. And I think other people have told me that I have a very symmetrical face. I don’t know. I don’t know. Maybe they’re right? I don’t know.”

🏅Flonkerton Medal Ceremony🏅
The “Weak Finale” Award: This season 1 finale had mixed reviews and low ratings, and our beloved show was nearly not picked up for a 2nd season.
The “Tables are Turned” Award: Jim is used to watching Pam with Roy, but for the first time we see Jim with another girl and Pam is clearly jealous.

Flonkerton’s Favorite Quotes
Michael: All right girls break it up, you’re being infiltrated. Cock in the henhouse.
Dwight: Cocks in the henhouse.
Michael: Don’t say cocks. Oh, what is your name, my fair lass?
Katy: Katy.
Michael: Ah, Katy. Wow. Look at you. You are, uh you’re like the new and improved Pam. Pam 6.0.

Dwight: The purse girl hits everything on my checklist. Creamy skin. Straight teeth. Curly hair. Amazing breasts. Not for me, for my children. The Schrutes produce very thirsty babies.

Michael: I live by one rule. No office romances. No way. Very messy. Inappropriate. No. But, I live by another rule: Just do it. Nike.

Jim: Pam and I are good buddies. I’m sort of Pam’s go-to guy for her problems. You know with stuff like work, or uh, her fiance Roy. Or uh… Nope, those are pretty much her only two problems.

Jim: She’d be perfect for you.
Dwight: Hmmm… she’s been talking to Michael a lot.
Jim: So, what? You’re Assistant Regional Manager.
Dwight: Assistant to the Regional Manager.
Jim: Well, you know what Dwight? He’s your work boss, okay? He is not your relationship boss.
Dwight: That’s true.
Jim: Plus you have so much more to talk to this girl about, You’re both um, salesmen. I mean that’s something right there.
Dwight: True. Plus I can talk to her about the origins of my last name.
Jim: It’s all gold.

Katy: Guys are usually my best customers, they buy the high end stuff like the beads and the sequins and stuff. For gifts, you know? They don’t know what they are looking at. So I make suggestions.

Jim: [to Pam] Okay, shhhh stop… stop whatever you’re doing because this is going to be good. [mimicking Dwight in high-falsetto voice] “Hi my name’s Dwight Schrute and I would like to buy a purse from you. Good lord, look at these purses! This is something special. Oh my God is this Salvatore Di-chini-asta?”
Pam: [mimicking Katy] “Oh definitely, definitely step in and out of it like that.”
Jim: “Yes, well I want to stress test it. You know, in case anything happens.”
[Dwight hits purse against table] Jim: “Oh! That was really. . . This is necessary to do to really give it a good workout. This is the ooooh… This is the prettiest one of all. I’m going to be the prettiest girl in the ball. Oh, how much?”
Pam: Oh, God. It’s sad. It’s so sad.

Katy: What colors do you like?
Angela: Gray. Dark Gray. Charcoal.

Michael: What, stop! Whoa! That’s my Drakkar Noir.
Ryan: No, this is Rite Aid Night Swept.
Michael: No, it is a perfect smell-alike. I’m not paying for the label. Right here. Give it.
Ryan: Well, it’s empty.
Michael: Not it’s not, there’s some in the straw. . . There, now you may throw it out.
Ryan: Wow. How many filet-o-fishes did you eat?
Michael: That’s over several months, Ryan.
Ryan: Still…

(Know of any fanfics centered around Hot Girl? Please comment here or on the forums)