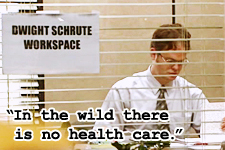 Quick Recap
The Topic: Corporate wants Michael to pick a new health care plan, a task Michael eagerly embraces until he realizes corporate really only wants him to pick a cheap plan. Knowing this will be an unpopular decision, Michael immediately tries to delegate the task to Jim, who in turn suggests Michael have Dwight pick the plan.
“I’m the lion. You’re dead”: Dwight is give the power to change the health care plan, and with great power comes a great inflation of Dwight’s ego. After insisting he use the conference room as a office workspace, Dwight picks the cheapest plan he can. With Michael deflecting any responsibility for the health care plan, the employees complain to Dwight , and Dwight compromises by making everyone write down their ailments so he can make sure it’s covered.
“I want that covered”: Knowing they have a perfect opportunity to wind up Dwight, Jim and Pam make a list of fake diseases such as Spontaneous Dental Hydroplosion fingers and Count Choculitis. This forces Dwight to hold a conference and make everyone raise their hands when he reads a disease name to ensure it’s covered by the health plan. You don’t wanna know what Kevin has.
The Big Surprise: Hoping to somehow rectify the fact that the new health care plan sucks, Michael sets out to get the staff a big surprise. When ice cream sandwiches don’t do the trick, Michael turns his eye to a fun trip. However, there are no free buses to Atlantic City, nor does the local mining museum have any sort of thrill rides. In the end, Michael has nothing for the staff, making an awkward end to a pretty crappy day.

🏅Flonkerton Medal Ceremony🏅
The “Yep, that’s what it’s like” Medal: The Office is funny because it draws on very real workplaces issues, and I’m sure many of us can related to learning of reduced health care benefits.

Flonkerton’s Favorite Quotes
Michael: The most sacred thing I do is care and provide for my workers, my family. I give them money. I give them food. Not directly, but through the money. I heal them. Today, I am in charge of picking a great new health care plan. Right? That’s what this is all about. Does that make me their doctor? Um… Yes, in a way. Yeah, like a specialist.

Jan: Sometimes a manager, like yourself, has to deliver the bad news to the employees. I do it all the time.
Michael: [scoffs] When have you ever done that?
Jan: I’m doing it right now. To you.

Jim: Right now, this is just a job. If I advance any higher in this company then this would be my career. And uh, well, if this were my career, I’d have to throw myself in front of a train.

Michael: If Dwight fails, then that is strike two, and good for me for, ah, for giving him a second chance. And if he succeeds, then, you know, no one will be prouder than I am. I groomed him. I made him what he is today. Unless he fails, and we’ve talked about that already.

Jim: OK, well, if you’ve never been sick, then you don’t have any antibodies.
Dwight: I don’t need them. Superior genes. I’m a Schrute. And superior brain power. Through concentration, I can raise and lower my cholesterol at will.
Pam: Why would you want to raise your cholesterol?
Dwight: So I can lower it.

Jim: Wait. What are you writing? Don’t write Ebola or mad cow disease. Right? ‘Cause I’m suffering from both.
Pam: I’m inventing new diseases.
Jim: Oh, great.
Pam: So, let’s say my teeth turn to liquid and then, they drip down the back of my throat. What would you call that?
Jim: I thought you said you were inventing diseases? That’s spontaneous dental hydroplosion.

Michael: [on his cell phone] Calling you to ask you a little favoroonie my friend. Um, trying to give the troops around here a little bit of a boost. And I was thinking that maybe we could take them down to take a spin on your big ride.
Man on Phone: You mean the elevator that takes you down into the mineshaft? It’s not really a ride.
Michael: It says here that it’s a 300ft drop.
Man on Phone: It goes 300 feet into the earth, but it moves really slowly.
Michael: So it’s not a free fall?
Man on Phone: It’s an industrial coal elevator.
Michael: Uh, all right. Well, once you get down into the mine, what… you got laser tag or something?

Dwight: The problem, Jim, is that people who are really suffering from a medical condition won’t receive the care they need, because someone in this office is coming up with all this ridiculous stuff. [reads off of paper] “Count Choculitis”
Jim: Sounds tough.
Dwight: Why did you write that down Jim? Is it because you know I love Count Chocula?

(Know of any fanfics centered around Health Care? Please comment here or on the forums)