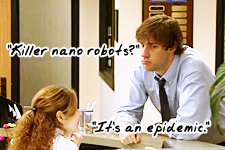 Previous Round, Diversity Day: Thanks to diversity seminars there wasn’t much Jim and Pam interaction, and Jim was having an awful day until Pam fell asleep on his shoulder, leading Jim to conclude it was “not a bad day.” Final score: +8

Jim starts the episode at Pam’s desk, talking about TV: +1
Pam takes a jab at Jim by saying she didn’t see the show Jim was talking about because she “has a life”: – 2
But Jim quickly retaliates and makes Pam laugh: +1
Jim and Pam pair up to confront Dwight about the new terrible health plan: +1
Playful flirting occurs when Pam and Jim dream up new diseases: +2
Jim is rather impressed with Pam’s “Killer Nano Robots” disease: +1
More mild flirting occurs when Pam calls Jim at his desk (ignoring Dwight in the conference room): +1
There’s not much interaction after that, though: – 2

Final Score: +3, A pretty average round, it’s overall positive and Jim and Pam display some playful banter, at the same time there’s no “big moment” like the shoulder-doze-off in the last round, an average viewer may see this round’s interactions as just two friendly coworkers and not anything more.

Next Round: The Alliance