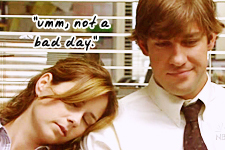 Previous Round, The Pilot: Jim and Pam are obviously great work buddies, and there are clear hints of an attraction between the two. However, in addition to the obvious issue of Pam being engaged, Pam is quite intimidated by the newly arrived cameras, resulting in a final score of Zero.

Pam Pong Scorecard
Episode 102: Diversity Day
A little flirting occurs when Pam talks to Jim about FreeCell: +2
Due to the seminars and Jim’s client, Pam and Jim don’t really get to interact much during “Diversity Day” -2
But the camera catches them glancing at/standing next to each other a couple times: +1
And Roy doesn’t make an appearance in this episode: +1
Jim immediately thinks of Pam when Ryan’s watching a video at Pam computer and says “she’s cute, huh?”: +2
But is quick to remind himself she’s engaged: -1
Pam falls asleep on Jim’s shoulder, resulting in a big love-struck smile from Jim: +4
She’s a little embarrassed when she wakes up and they don’t really talk afterwards: -1
But still, it completely made Jim’s day: +2

Final Score: +8, Pam falling asleep on Jim’s shoulder is promising as it’s a sign she is very comfortable with him. Also that one simple act makes Jim’s problems melt away and even after losing his biggest client he concludes that today was “not a bad day.”

Next Round: Health Care