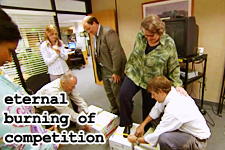 “Office Olympics”
Season 2 Episode 3
Air Date: October 4, 2005
Writer: Michael Schur
Summary: While Michael takes Dwight with him to close on his condo, Jim learns about the games staffers play during their “down time”, and initiates Office Games.

Quick Recap
Cold Open; I have Worms: Michael is at the office very early, and Ryan comes in with breakfast. when Ryan asks what Michael needed so early, Michael admits he only called in Ryan for breakfast.
“Today, I become a homeowner”: Michael leaves the office to close on his condo, taking Dwight with him. They learn the good points of the condo (gay friendly neighborhood) and the bad points (Michael can hear every word the neighbor says through the shared wall)
Eternal Burning of Competition: Jim is especially bored today, so he starts asking others how they fend off boredom during the day. Pam throws things into Dwight’s mug from her desk when Dwight’s not around. The Accountants play paper football. The Annex plays “Dunderball”. Jim decided to combine these games, as well as new games such as Flonkerton, into the Office Olympics, where the winners get gold yogurt lids as medals.
“You’ll be paying this off in your mid-70s”: On the verge of signing his mortgage papers, Michael, who thinks it’s only a 10 year mortgage, finds out it’s actually a 30-year mortgage. Michael suddenly gets cold feet, and demands a price reduction. But when his realtor, Carol, tells him he has to sign the papers or lose several thousand dollars, Michael signs.
“Those are the Doves”: The Office games come to an abrupt stop when Michael and Dwight return to the office. Jim, who wants to keep playing, asks Pam to help him arrange a closing ceremonies. They give Michael a “gold medal” for closing on his condo, and play the national anthem. Everyone claps, and Michael is so moves, he has a tear in his eye.

🏅Flonkerton Medal Ceremony🏅
The “Money Beet” Medal: This is the first time we hear about Dwight’s beet farm that he runs with his cousin, Mose.
The “Gold Yogurt Lid” Medal: A gold yogurt lid will make an appearance in the Season 3 finale, and it’s pretty great.

Flonkerton’s Favorite Quotes
Michael: I’m an early bird, and I’m a night owl. So I’m wise, and I have worms.

Dwight: I have been Michael’s #2 guy for about 5 years. And we make a great team. We’re like one of those classic famous teams. He’s like Mozart, and I’m like Mozart’s friend. No. I’m like Butch Cassidy, and Michael is like Mozart. You try and hurt Mozart; you’re going to get a bullet in your head courtesy of Butch Cassidy.

Jim: Hey, do you guys have any other games?
Kevin: Sometimes we play “Who can put the most M&M’s in their mouth?”
Angela: You play that.

Dwight: Actually, I do own property. My grandfather left me a 60-acre working beet farm. I run it with my cousin, Mose. We sell beets to local stores and restaurants. It’s a nice little farm. Sometimes teenagers use it for sex.

Dwight: A thirty year mortgage at Michael’s age essentially means that he’s buying a coffin. If I were buying my coffin, I would get one with thicker walls so you couldn’t hear the other dead people.

Pam: The thing about Jim, is when he’s excited about something, like the Office Olympics, he gets really into it and he does a really great job. But the problem with Jim is that he works here, so that hardly ever happens.

[Michael asks Dwight if he’s like to rent the 3rd bedroom] Dwight: Question. Where can I put my terrarium?
Michael: What the hell is a terrarium?
Dwight: It’s a fish tank for snakes and lizards.
Michael: Oh, so an aquarium. Ah, that will not come into this place.
Dwight: Question. My grandparents left me a large number of armoires…

Pam: Are you sure you don’t want to play?
Angela: I’m sure.
Pam: Come on Angela, don’t you have a game?
Angela: I have one, yes.
Pam: Well, let’s play, what is it?
Angela: I call it Pam Pong. I count how many times Jim gets up from his desk and goes to reception to talk to you.
Pam: We’re friends.
Angela: Apparently. [across the room] Jim: Very nicely done. I think that’s H-O-R for Stanley, and H-O for Phyllis.
Phyllis: Are you calling me a ho?
Jim: Oh my god. Phyllis, coming alive. I like it.

Dwight: It was nice of him to offer, but I live in a nine bedroom farm house. I have my own crossbow range. It’s a perfect situation for me. Although two bathrooms would have been nice, we just have the one. And it’s under the porch.

Dwight: You know you can always refinance your mortgage. We had a 15 year on our beet farm. We paid it off early.
Michael: Yeah, well, you know what? Nobody cares about your stupid beet farm. Beets are the worst.
Dwight: People love beets.
Michael: Nobody likes beets.
Dwight: Everybody loves beets.
Michael: Nobody likes beets, Dwight. Why don’t you grow something that everybody does like? You should grow candy. [mutters] I’d love a piece of candy right now.

(Know of any fanfics centered around “Office Olympics”? Please comment here or on the forums)