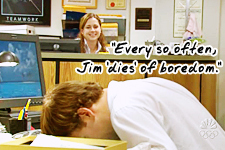 Previous Round, Sexual Harassment: There wasn’t a lot of interaction between Jim and Pam, and Jim’s effort to meet Pam’s mom was thwarted by Roy. However, as soon as Roy left, Jim heard Pam’s mom ask Pam “Which one is Jim?” indicating Pam has talked to her mom about Jim, and resulting in a final score of +5

Mild flirting occurs when Jim “dies” and Pam has to entertain him: +1
They worked together to create the Office Olympic Games: +2
Roy doesn’t make an appearance, nor is there any mention of him: +1
Pam tells the camera how Jim does a great job when he’s excited about something: +1
But counters that since he works at Dunder Mifflin, Jim rarely gets excited about things: -1
Angela indicates that she thinks Jim and Pam are more-than-friendly with each other: -2
Pam is also quick to deny she and Jim are anything more than friends: -2
Jim compliments Pam’s doves, and high-fives her: +2
But then Pam sees Angela checking off on her “Pam Pong” card: -1
Pam helps Jim with the closing ceremonies despite all her messages: +2
And Jim and Pam exchange smiles during the “Closing Ceremonies”: +1

Final Score: +4 This episode showcases how well Jim and Pam work as a team, and how they can bring the best out in each other. However, it also shows Pam being a bit in denial about her feelings for Jim, and getting extremely uncomfortable with any hint that other people thinks she and Jim are more than friends.

Next Round: The Fire