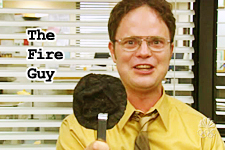 “The Fire”
Season 2 Episode 4
Air Date: October 11, 2005
Writer: BJ Novak
Summary: The staff evacuates to the parking lot after a fire starts in the kitchen. Dwight can’t hide his jealously over Michael’s interest in Ryan, while the rest of the staff engages in games such as “Desert Island” and “Who would you do?”

Quick Recap
Cold Opener; “How’d you get this number?”: Pam answers the phone, and transfer it to Jim. It’s Katy, the purse girl, and Pam (awkwardly) tells the camera that Katy and Jim are dating. When Jim hangs up, Pam suggests Jim give Katy his extension number.
Not a drill: The fire alarm goes off, and everyone (slowly) evacuates to the parking lot. While most of the office workers engage in games to pass the time, Michael is “mentoring” Ryan the Temp in all things business. But as Ryan is in business school, it’s turning out he has more to teach Michael.
Desert Island: After a mediocre round of “Desert Island Books”, Jim changes the game to “Desert Island Movies”. It doesn’t go much better as people seem to list “guilty pleasure” movies. Things get even worse when the staff starts playing “Who would you do?” Jim is uncomfortable when several men say they’d do Pam, but not as uncomfortable as Ryan gets when Michael’s says he would do him.
“They are so cute”: Katy arrives to pick Jim up for lunch, and Jim tells her to think of some movies for the “Desert Island” game. When Katy reveals one of her top movies to be “Legally Blond”, Pam laughs, and Jim sheepishly suggests he and Katy just head to lunch. Jim glances at Pam before getting in the car, catching her giving a kiss to Roy.
The Fire Guy: Dwight is jealous of the extra attention Ryan is getting from Michael. When Michael insults Dwight, Dwight sulks off, kicking things and listening to sad music. Later, when Michael thinks he left his phone in the office, Dwight rushes inside the smoky building to retrieve it. Dwight then emerges with a burnt disk; a cheesy pita that Ryan put in the toaster oven on the wrong setting, thus setting off the fire alarm. Now Ryan, who didn’t want to be at Dunder Mifflin long enough to earn a nickname, is now “The Fire Guy.”

🏅Flonkerton Medal Ceremony🏅
The “Getting to know you” Medal: Though they work in the same office all day, it takes a fire drill to get the office staff to talk and learn about each other.
The “Hey Jealousy” Medal: Jim’s jealousy of Roy and Pam’s jealousy of Katy are to be expected, but the green eyed monster is also present with Dwight, who is very envious when Michael gets chummy with Ryan.

Flonkerton’s Favorite Quotes
Pam: Katy and Jim met in the office. And now I guess they’re like going out, or dating, or something. And, uh… I don’t know, you know? They’re just… She calls him, and they… You know, I’m sorry. I feel like I’m talking really loud. Am I talking really loud?

Michael: Yes, I was the first one out. And, yes, I’ve heard women and children first. But, we do not employ children. We are not a sweat shop. Thankfully. And, uh, women are equal in the workplace by law. So, I let them out first, I have a lawsuit on my hands.

Jim: Okay, so… three books on a desert island? Angela.
Angela: The Bible.
Stanley: That’s one book. You’ve got two others.
Angela: A Purpose Driven Life.
Jim: Nice. Third book?
Angela: No.
Jim: Okay. Phyllis.
Phyllis: Um, The DaVinci Code.
Angela: The DaVinci Code! I would take The DaVinci Code… so I could burn The DaVinci Code.
Dwight: Okay. Great, that’s going to keep you warm for like 7 seconds. Question: is there fire wood on the island?
Jim: I guess.
Dwight: Then I would bring an axe, no books.
Jim: Uh, it has to be a book, Dwight.
Dwight: Fine. Physician’s Desk Reference.
Jim: Nice. Smart.
Dwight: …hollowed out, inside: waterproof matches, iodine tablets, beet seeds, protein bars, NASA blanket, and, in case I get bored, Harry Potter and Sorcerer’s Stone. No, Harry Potter and the Prisoner of Azkaban. Question: did my shoes come off in the plane crash?

Jim: Okay. Thought people read more books. DVDs! Five movies. What would you bring to the island? Yes! Meredith?
Meredith: Legends of the Fall, My Big Fat Greek Wedding, Legally Blond, Bridges of Madison County…
[cut to talking head with Jim and Pam] Jim: Wow.
Pam: Legends of the Fall?
Jim: Wow. Bridges of Madison County, Legally Blond, these movies are just… .
Pam: Well, I kind of liked Legally…
Jim: Wait, wait, wait. Pam. No. Do you understand? The… the game is Desert Island Movies, not guilty pleasure movies. Desert Island Movies are the movies you’re going to watch for the rest of your life! Forever! Unforgivable.
Pam: I take it back.
Jim: Unforgivable.
Pam: I take it back!
Jim: Good.

[The women are playing “Who would you do?”] Meredith: Jim.
Phyllis: Definitely Jim.
Kelly: Definitely, definitely, Jim. How about you Pam?
Pam: Um… Oscar’s kind of cute.
Phyllis: Yeah, I like Oscar.
Pam: Ooh, Toby!

Michael: Jim? You’re next. Who would you do?
Jim: Um… Kevin, hands down. Yeah. He’s really got that teddy bear thing going on, and afterwards, we could just watch bowling.
Michael: Well, I would definitely have sex with Ryan. ‘Cause he is going to own his own business.
Roy: [laughing] You’re all gay!

Dwight: [coughing] Everyone, okay? Uh, I have an announcement. Apparently, in business school, they don’t teach you how to operate a toaster oven. Because some smart, sexy temp left his cheese pita on oven instead of timing it for the toaster thing.

(Know of any fanfics centered around “The Fire”? Please comment here or on the forums)