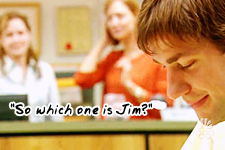 Previous Round, The Dundies: With the early departure of Roy and more than a few margaritas and beers, Pam release some inhibitions at the Dundies, resulting in her drunkenly kissing Jim. Though she chickened out of asking Jim a question at the end, it was still the best Dundies ever, and resulted in a final score of +8

Jim is looking forward to meeting Pam’s mom: +1
And makes Pam laugh with his “questions” for her mom: +2
When Jim talks about his “office relationship” for a moment it sounds like he’s talking about Pam (but it was the doll): +1
Roy walks in right when Jim is about to introduce himself to Pam’s mom: -3
Pam’s mom acts really friendly towards Roy: -2
Plus Roy is actually acting like a nice, funny guy: -3
However, as soon as Roy leaves, Pam’s mom whispers “Which one is Jim?”: +5
Pam is embarrassed, but also a little giggly at her mom’s question: +2
And of course, it made Jim’s day as he breaks into a smile: +2

Final Score: +5, There wasn’t much interaction between Jim and Pam in this round, but the “Which one is Jim?” moment was extremely promising. Pam’s mom whispered the question like it was a fun secret between her and Pam, and Pam reacted like a teenager with a crush. It’s clear Pam has talked about Jim with her mom, and not just in a co-worker capacity.

Next Round: Office Olympics