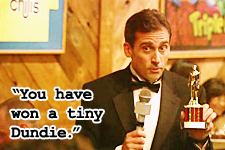 “The Dundies”
Season 2 Episode 1
Air Date: September 20, 2005
Writer: Mindy Kaling
Summary: It’s time for the Dundie awards, and Michael couldn’t be more excited, while his staff braces for the annual humiliation fest. Pam is not sure if she can handle winning the “World’s Longest Engagement” Dundie yet again.

Quick Recap
“The Dundies are like a car wreck”: It’s time for the annual office awards, the “Dundies”. It’s when everyone meets at Chili’s, Michael sings parodies of various songs, and hands out awards like the “Show me the money” award. The only good point for the employees is dinner is usually paid for, but this year, because of Michael’s frivolous party throwing, corporate is not paying.
World’s Longest Engagement: Pam especially is dreading the Dundie awards, where Michael has a running gag of giving the “World’s Longest Engagement” award to her and Roy. Jim asks Michael to change the award, but Michael claims “it’s the best one”.
Why are you in the ladies room?: Dwight gets wind that someone has written something about Michael in the ladies room. He tries to sneak in there, but is caught by Phyllis. Dwight then threatens to take away bathroom privileges, but no one really listens to him. No one owns up to the graffiti until the end of the episode when Pam admits to Jim it was her.
Best Dundies Ever: The Dundies are underway at Chili’s, and it’s going as it always does, with Michael’s singing, making bad jokes and impersonations, and giving away awards like “Hottest in the Office”, “ Busiest Beaver”, and “Spicy Curry”. Michael eventually gets discouraged when other Chili’s customers start to heckle him, but the office employees rally around him, insisting he finish giving out his awards.
“I feel God in this Chili’s”: Roy and Darryl leave to go to a bar, but Pam decides to stay. She starts finishing other people’s drinks and is pleasantly surprised when Michael awards her the “Whitest Sneakers” Dundie. The more she drinks, the more giggly and flirty she gets with Jim, until she falls off a stool. Dwight thinks Pam is hurt and causes a scene, and the Chili’s manager bans Pam for excessive drinking. The drunken Pam is blissfully unaware, though, proclaiming that “This was the best Dundies ever!”

🏅Flonkerton Medal Ceremony🏅
The “New Direction” Medal: This Season 2 premiere definitely has a brighter look and more upbeat feel than Season 1, which borrowed heavily from the darker and more cynical UK Office. Michael Scott feels much more like his own unique character, rather than an American David Brent.

Flonkerton’s Favorite Quotes
Michael: Tonight is the Dundies, the annual employee awards night here at Dunder Mifflin. And this is everybody’s favorite day. Everybody looks forward to it, because, you know, a lot of the people here don’t get trophies, very often. Like Meredith or Kevin, I mean, who’s gonna give Kevin an award? Dunkin’ Donuts?

Michael: So why don’t I take you on a tour of past Dundie winners. We got Fat Jim Halpert here. Jim, why don’t you show of your Dundies to the camera?
Jim: Oh, I can’t because I keep them hidden. I don’t want to look at them and get cocky.
Michael: Oh, that’s a good idea.
Dwight: Mine are at home in a display case above my bed.
Michael: Gyaaah. T.M.I. T.M.I my friends.
Michael talking head: T.M.I.? Too much information. Ah, it’s just easier to say T.M.I. I used to say “Don’t go there” but that’s… lame.

[Jan tells Michael corporate isn’t paying for the Dundies] Michael: You’re dropping an A-Bomb on me here.
Jan: Really? I’m dropping an atomic bomb on you?
Michael: Well, yeah, I mean, what is…
Jan: You already had a party on May 5th for no reason.
Michael: No reason?! It was the 05 05 05 party. It happens once every billion years.
Jan: And a tsunami relief fundraiser which somehow lost a lot of money.
Michael: Okay, no, that was a FUN raiser. I think I made that very clear in the fliers, fun, F-U-N.
Jan: Okay, well, I don’t understand why anyone would have a tsunami FUN raiser, Michael. I mean, that doesn’t even make sense.
Michael: Well, I think a lot of people were very affected by the footage.

Dwight: Excuse me, everyone, could I have your attention please. I just wanted to say that the women in this office are terrible. Especially the ones who wrote that stuff about Michael on the bathroom wall. Having a bathroom is a privilege. It is called a ladies room for a reason. And if you cannot behave like ladies, well then you are not going to have a bathroom.
Pam: You’re taking away our bathroom?
Dwight: We are going to have two men’s rooms.
Phyllis: But where would we…go?
Dwight: Be prepared to hold folks

Michael: And now… to someone who quietly goes about their job, but always seems to land the biggest accounts…the “Busiest Beaver” award goes to Phyllis Lapin. Yeah, way to go Phyllis. Nice work, per usual.
Phyllis: This says “Bushiest Beaver”.
Michael: What? I told them busiest…idiots.
Phyllis: It’s, it’s fine.
Michael: Well, we’ll fix it up. You don’t have to display that.

Michael: This next award goes to somebody, who really, lights up the office. Somebody, who I think a lot of us, cannot keep, from checking out. The “Hottest in the Office” award goes to…Ryan the temp! Yeah. [singing to music] “Hidy ho, you sexy thang. You sexy thang you.” Here you go.
Ryan talking head: What am I going to do with the award? Nothing. I-I don’t know what I’m going to do. That’s the least of my…concerns right now.

[Pam is sipping an empty glass] Jim: I think those might be empty.
Pam: No, no. ‘Cause the ice melts and then it’s like second drink!
Jim: Second drink?

Michael: It’s so freakin’ hot in there. Now I know what Bob Hope was going through when he performed in Saudi Arabia. Man! I got Dwight sucking the funny out of the room, but you do what you can do.

Michael: And this next award is going out to our own little Pam Beesly…I think we all know what award Pam is going to be getting this year. It is the “Whitest Sneakers” award! Because she always has the whitest tennis shoes on! Get on down here! Pam Beesly ladies and gentlemen!
Pam: I have so many people to thank for this award! Okay, first off, my Keds. Because I couldn’t have done it without them. [people clap] Thank you. Let’s give Michael a round of applause for MC-ing tonight because [people start clapping again] this is a lot harder than it looks. And also because of Dwight too. Um, so, finally, I want to thank God. Because God gave me this Dundie. And, I feel God in this Chili’s tonight. WHOOOOOOOO!!!!

Jim: What a great year for the Dundies. We got to see Ping. And we learned of Michael’s true feelings for Ryan. Which was touching. And, we heard Michael change the lyrics to a number of classic songs. Which for me, has ruined them for life. [looks at Pam, who is staring at him, nodding] What?
Pam: Nothing.
Jim: Okay.
Pam: [smiles] What?
Jim: I don’t know, what?
[Pam starts laughing, then falls off the bar stool] Jim: Oh my God! You are so drunk! [to camera] Did you get that? Please tell me you got that.

Michael: Was this year’s Dundies a success? Well, let’s see, I made Pam laugh so hard, that she fell out of her chair, and she almost broke her neck. So I killed, almost.

(Know of any fanfics centered around The Dundies? Please comment here or on the forums)