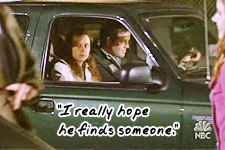 Previous round, Basketball: Though Jim managed to impress Pam with his basketball skills, Roy was ever present during this episode, and Pam and Roy’s PDAs negated any Jim and Pam progress. Final score: -2

At first, Jim has no interest in Katy the purse girl: +2
He also can’t help but glance at Pam when asked what his “type” is: +1
Roy makes a comment about dating Pam, even though they are actually engaged: +1
Jim tells the camera he kind of Pam’s “go to guy” in the office: +1
Jim rushes to Pam to observe and comment on Dwight talking to Katy: +2
Pam comes straight to Jim with Michael gossip (sleeps on a futon!): +1
But their banter is interrupted by Roy: -1
Pam initially rejects Roy’s apology: +1
But then starts giggling as Roy tickles her right next to Jim, to the point that Jim leaves: -3
Pam tells the cameras how great Jim is and they’re like best friends: +1
But follows up by saying she hopes he finds someone: -1
After Roy and Pam’s tickle fight, Jim decided to chat it up with Katy (and is rather flirty and cute with her): -2
When talking about weekend plans, Jim tells Pam he’s going to see Katy -1
Their conversation gets a little awkward after that: -2
At the same time, Pam’s awkwardness indicates she’s jealous of Katy (and therefore harboring feelings for Jim): +1
The camera catches Pam putting on lip gloss +1
Jim continues to be cute and flirty with Katy as they walk to his car: -1
But Pam watches Jim and Katy with a rather wistful expression as she and Roy drive away: +2

Final score: +3, Though on the surface it seems like there’s little Jim and Pam progress, there are a few positive things to derive from this round. We get a real glimpse of Roy’s insensitivity, and how tired Pam is becoming of it. We also see Jim’s crush isn’t entirely one sided; Pam is quite jealous of Katy, and we see Pam giving Jim a bit of a longing look at the end, perhaps wishing she were the one he was going out to get drinks with.